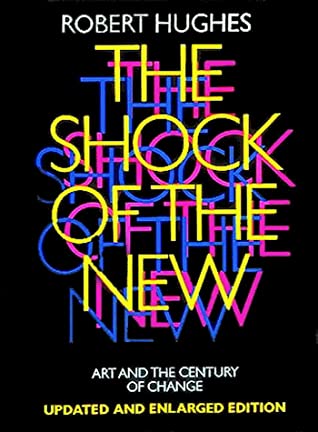 A beautifully illustrated hundred-year history of modern art, from cubism to pop and avant-garde. More than 250 color photos....

Robert Studley Forrest Hughes, AO was an Australian art critic, writer and television documentary maker who has resided in New York since 1970. He was educated at St Ignatius' College, Riverview before going on to study arts and then architecture at the University of Sydney. At university, Hughes associated with the Sydney "Push" a group of artists, writers, intellectuals and drinkers. Among the group were Germaine Greer and Clive James. Hughes, an aspiring artist and poet, abandoned his university endeavours to become first a cartoonist and then an art critic for the Sydney periodical The Observer, edited by Donald Horne. Around this time he wrote a history of Australian painting, titled The Art of Australia, which is still considered to be an important work. It was published in 1966. Hughes was also briefly involved in the original Sydney version of Oz magazine, and wrote art criticism for The Nation and The Sunday Mirror.

Hughes left Australia for Europe in 1964, living for a time in Italy before settling in London, England (1965) where he wrote for The Spectator, The Daily Telegraph, The Times and The Observer, among others, and contributed to the London version of Oz. In 1970 he obtained the position of art critic for TIME magazine and he moved to New York. He quickly established himself in the United States as an influential art critic.In 1975, he and Don Brady provided the narration for the film Protected, a documentary showing what life was like for Indigenous Australians on Palm Island.

In 1980, the BBC broadcast The Shock of the New, Hughes's television series on the development of modern art since the Impressionists. It was accompanied by a book of the same name; its combination of insight, wit and accessibility are still widely praised. In 1987, The Fatal Shore, Hughes's study of the British penal colonies and early European settlement of Australia, became an international best-seller.

Hughes provided commentary on the work of artist Robert Crumb in parts of the 1994 film Crumb, calling Crumb "the American Breughel". His 1997 television series American Visions reviewed the history of American art since the Revolution. He was again dismissive of much recent art; this time, sculptor Jeff Koons was subjected to criticism. Australia: Beyond the Fatal Shore (2000) was a series musing on modern Australia and Hughes's relationship with it. Hughes's 2002 documentary on the painter Francisco Goya, Goya: Crazy Like a Genius, was broadcast on the first night of the BBC's domestic digital service. Hughes created a one hour update to The Shock of the New. Titled The New Shock of the New, the program aired first in 2004. Hughes published the first volume of his memoirs, Things I Didnt Know, in 2006.