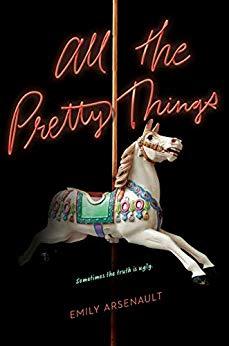 All the Pretty Things Reviews

I havent had a terribly interesting life, so I wont share too many details. But the highlights include:

When I was a preschooler and a kindergartner, I had a lazy eye and I was Connecticuts Miss Prevent Blindness, appearing on pamphlets and television urging parents to get their kids eyes checked. I wore an eye patch and clutched a blonde doll wearing a similar patch. I imagine it was all rather maudlin, but at the time I wouldnt have known that word.

I wrote my first novel when I was in fifth grade. It was over a hundred pages and took me the whole school year to write. (It was about five girls at a summer camp. Id never been to a summer camp, but had always wanted to attend one.) When I was all finished, I turned back to the first page, eager to read it all from the beginning. I was horrified at how bad it was.

At age thirteen, I got to go to a real sleepaway camp. It was nothing like the book I had written.

I studied philosophy in college. So did my husband. We met in a Hegel class, which is awfully romantic.

I worked as an editorial assistant at Merriam-Webster from 1998-2002, and got to help write definitions for their dictionaries.

My husband and I served in the Peace Corps together, working in rural South Africa. I miss Losasaneng, miss many of the people we met there, and dream about it often.

I am now working on my third novel. It is tentatively titled Just Someone I Used to Know, named after and old song Porter Wagoner and Dolly Parton used to sing together.