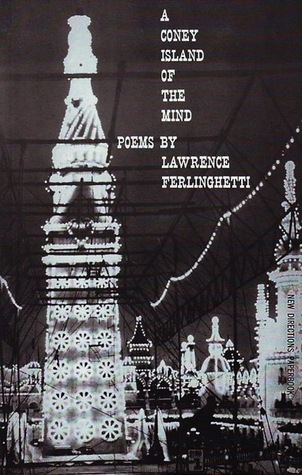 The title of this book is taken from Henry Miller's "Into the Night Life" and expresses the way Lawrence Ferlinghetti felt about these poems when he wrote them during a short period in the 1950's?as if they were, taken together, a kind of Coney Island of the mind, a kind of circus of the soul....

A prominent voice of the wide-open poetry movement that began in the 1950s, Lawrence Ferlinghetti has written poetry, translation, fiction, theater, art criticism, film narration, and essays. Often concerned with politics and social issues, Ferlinghettis poetry countered the literary elite's definition of art and the artist's role in the world. Though imbued with the commonplace, his poetry cannot be simply described as polemic or personal protest, for it stands on his craftsmanship, thematics, and grounding in tradition.

Ferlinghetti was born in Yonkers in 1919, son of Carlo Ferlinghetti who was from the province of Brescia and Clemence Albertine Mendes-Monsanto. Following his undergraduate years at the University of North Carolina at Chapel Hill, he served in the U.S. Navy in World War II as a ship's commander. He received a Masters degree from Columbia University in 1947 and a Doctorate de lUniversit de Paris (Sorbonne) in 1950. From 1951 to 1953, when he settled in San Francisco, he taught French in an adult education program, painted, and wrote art criticism. In 1953, with Peter D. Martin, he founded City Lights Bookstore, the first all-paperbound bookshop in the country, and by 1955 he had launched the City Lights publishing house.

The bookstore has served for half a century as a meeting place for writers, artists, and intellectuals. City Lights Publishers began with the Pocket Poets Series, through which Ferlinghetti aimed to create an international, dissident ferment. His publication of Allen Ginsbergs Howl & Other Poems in 1956 led to his arrest on obscenity charges, and the trial that followed drew national attention to the San Francisco Renaissance and Beat movement writers. (He was overwhelmingly supported by prestigious literary and academic figures, and was acquitted.) This landmark First Amendment case established a legal precedent for the publication of controversial work with redeeming social importance.

Ferlinghettis paintings have been shown at various galleries around the world, from the Butler Museum of American Painting to Il Palazzo delle Esposizioni in Rome. He has been associated with the international Fluxus movement through the Archivio Francesco Conz in Verona. He has toured Italy, giving poetry readings in Roma, Napoli, Bologna, Firenze, Milano, Verona, Brescia, Cagliari, Torino, Venezia, and Sicilia. He won the Premio Taormino in 1973, and since then has been awarded the Premio Camaiore, the Premio Flaiano, the Premio Cavour. among others. He is published in Italy by Oscar Mondadori, City Lights Italia, and Minimum Fax. He was instrumental in arranging extensive poetry tours in Italy produced by City Lights Italia in Firenze. He has translated from the Italian Pier Paolo Pasolins Poemi Romani, which is published by City Lights Books. In San Francisco, his work can regularly be seen at the George Krevsky Gallery at 77 Geary Street.

Ferlinghettis A Coney Island of the Mind continues to be the most popular poetry book in the U.S. It has been translated into nine languages, and there are nearly 1,000,000 copies in print. The author of poetry, plays, fiction, art criticism, and essays, he has a dozen books currently in print in the U.S., and his work has been translated in many countries and in many languages. His most recent books are A Far Rockaway of the Heart (1997), How to Paint Sunlight (2001), and Americus Book I (2004) published by New Directions.