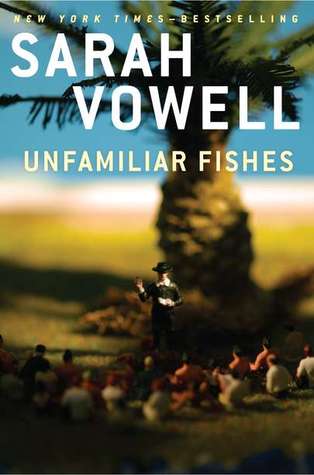 Sarah Jane Vowell is an American author, journalist, humorist, and commentator. Often referred to as a "social observer," Vowell has authored several books and is a regular contributor to the radio program This American Life on Public Radio International. She was also the voice of Violet in the animated film The Incredibles and a short documentary, VOWELLET - An Essay by SARAH VOWELL in the "Behind the Scenes" extras of The Incredibles DVD Release.

She earned a B.A. from Montana State University in 1993 in Modern Languages and Literatures and an M.A. in Art History at the School of the Art Institute of Chicago in 1996. Vowell received the Music Journalism Award in 1996.

Vowell is a New York Times bestselling author of five nonfiction books on American history and culture. Her most recent book is Unfamiliar Fishes (2011), which reviews the takeover of Hawaii's property and politics first by white missionaries from the United States and later joined by American plantation growers, ultimately resulting in a Coup d'tat, restricted voting rights for nonwhites, and forced statehood for the small chain of islands. Her earlier book, The Wordy Shipmates (2008), examines the New England Puritans and their journey to and impact on America. She studies John Winthrops 1630 sermon A Model of Christian Charity and the bloody story that resulted from American exceptionalism. And she also traces the relationship of Winthrop, Massachusetts first governor, and Roger Williams, the Calvinist minister who founded Rhode Island an unlikely friendship that was emblematic of the polar extremes of the American foundation. Throughout, she reveals how American history can show up in the most unexpected places in our modern culture, often in unexpected ways.

Her book Assassination Vacation (2005) describes a road trip to tourist sites devoted to the murders of presidents Lincoln, Garfield and McKinley. Vowell examines what these acts of political violence reveal about our national character and our contemporary society.

Her writing has been published in The Village Voice, Esquire, GQ, Spin, The New York Times, Los Angeles Times, and the SF Weekly, and she has been a regular contributor to the online magazine Salon. She was one of the original contributors to McSweeneys, also participating in many of the quarterlys readings and shows.

In 2008, Vowell contributed an essay about Montana to the book State by State: A Panoramic Portrait of America.