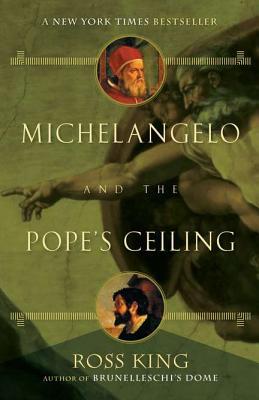 Ross King (born July 16, 1962) is a Canadian novelist and non-fiction writer. He began his career by writing two works of historical fiction in the 1990s, later turning to non-fiction, and has since written several critically acclaimed and best-selling historical works.

King was born in Estevan, Saskatchewan, Canada and was raised in the nearby village of North Portal. He received his undergraduate university education at the University of Regina, where in 1984 he completed a Bachelor of Arts (Honours) degree in English Literature. Continuing his studies at the University of Regina, he received a Master of Arts degree in 1986 upon completing a thesis on the poet T.S. Eliot. Later he achieved a Ph.D. from York University in Toronto (1992), where he specialized eighteenth-century English literature.

King moved to England to take up a position as a post-doctoral research fellow at University College, London. It was at this time that he began writing his first novel.

For Michelangelo and the Pope's Ceiling, King was nominated in 2003 for a National Book Critics Circle Award. Brunelleschis Dome was on the bestseller lists of the New York Times, the Boston Globe and the San Francisco Chronicle, and was the recipient of several awards including the 2000 Book Sense Nonfiction Book of the Year.

He lectures frequently in both Europe and North America, and has given guided tours of the cathedral of Santa Maria del Fiore in Florence and of the Sistine Chapel in Rome.

King currently lives in Woodstock, England with his wife Melanie