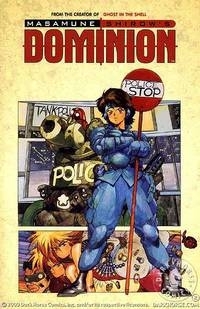 Masamune Shirow ( ) is an internationally renowned manga artist. He is best known for the manga Ghost in the Shell, which has since been turned into two theatrical anime movies, two anime TV series, an anime TV movie, and several video games. Shirow is also known for creating erotic art.
Born in the Hygo Prefecture capital city of Kobe, he studied oil painting at Osaka University of Arts. While in college, he developed an interest in manga, which led him to create his own complete work, Black Magic, which was published in the manga fanzine Atlas. His work caught the eye of Seishinsha President Harumichi Aoki, who offered to publish him. The result was Appleseed, a full volume of densely-plotted drama taking place in an ambiguous future. The story was a sensation, and won the 1986 Seiun Award for Best Manga. After a professional reprint of Black Magic and a second volume of Appleseed, he released Dominion in 1986. Two more volumes of Appleseed followed before he began work on Ghost in the Shell.