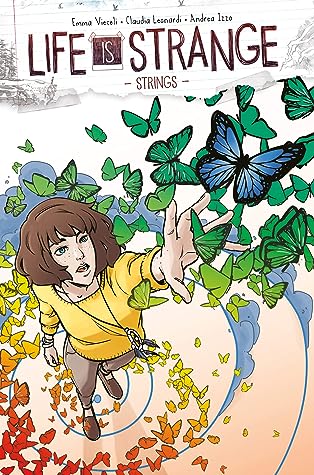 Titan Comics and SQUARE ENIXŪ are thrilled to announce an all-new graphic novel set in the world of the critically acclaimed, award-winning, highly successful video game series, LIFE IS STRANGE(TM). The adventures of Max, Chloe and Rachel continue! Collects issues #9-12 of the Life Is Strange Comic series....

Emma Vieceli (born June 13, 1979, in Essex) is a professional British comics artist of Italian-English heritage. She is currently a resident of a small village in Cambridgeshire, England.

A big fan of the variety that comic storytelling can provide, Emma's career to date has seen her work with several publishers and formats for varying audiences. Her credits include work on the MANGA SHAKESPEARE series for SelfMadeHero, GIRL COMICS for Marvel Comics, VIOLET for the DFC, MY LITTLE PONY for Hasbro, COMIC BOOK TATTOO for Image comics, THE THRILL ELECTRIC online motion comic for channel 4 with John Reppion and Leah Moore, and her creator-owned title DRAGON HEIR for UK collaborative and publisher, Sweatdrop Studios, amongst others.

She is currently working on two graphic novel series; THE AVALON CHRONICLES with Nunzio Defilippis and Christina Weir for Oni Press, and the New York Times best-seller and goodreads award-winning Vampire Academy with Richelle Mead and Leigh Dragoon for Penguin books, and her work can also be spotted sometimes within the pages of ImagineFX as a member of their artist panel.

Vieceli joined Sweatdrop Studios in 2002, and through the group released her own comic series, 'Dragon Heir'. She has also contributed to anthology titles including Boiled Spoons, Cold Sweat, Love, Sweat & Tears, Pink is for Girls and Planet Manga (A&I Covermount) and in 2005 she achieved a runner up position in the first Rising Stars of Manga United Kingdom & Ireland Competition, with her 15-page shjo entry, "Between the Lines". She included cameo appearances of various titles being published under Sweatdrop Studios in her short story; Looking for the Sun, Once upon a Time, Fantastic Cat, as well as Dragon Heir.

She has worked on comic adaptations of William Shakespeare's Hamlet and Much Ado About Nothing for Self Made Hero. Amongst other projects, has worked on the art and design of the collectible card game Herocard Cyberspace from Tablestar Games and was also of the head contributors to Draw Manga Sweatdrop Studios from New Holland Publishers (UK) Ltd. Vieceli has worked with Spacedog Entertainment, illustrating the cover to eV, a short story in Princess Ai: Rumors From The Other Side, both published by Tokyopop, and a story in Tori Amos' Comic Book Tattoo a 480 page anthology published by Image Comics on July 3, 2008. In addition, she created Violet for The DFC, which was previewed in The Guardian Comic on May 31, 2008.

In 2011, Vieceli provided the art for the Vampire Academy graphic novel, based on the novels of the same name. She is also working on the Avalon Chronicles series for Oni Press.