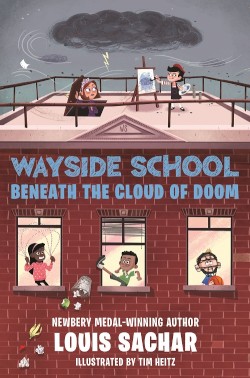 Louis was born in East Meadow, New York, in 1954. When he was nine, he moved to Tustin, California. He went to college at the University of California at Berkeley and graduated in 1976, as an economics major. The next year, he wrote his first book, Sideways Stories from Wayside School .

He was working at a sweater warehouse during the day and wrote at night. Almost a year later, he was fired from the job. He decided to go to law school. He attended Hastings College of the Law in San Francisco.

His first book was published while he was in law school. He graduated in 1980. For the next eight years he worked part-time as a lawyer and continued to try to write children's books. Then his books started selling well enough so that he was able to quit practicing law. His wife's name is Carla. When he first met her, she was a counselor at an elementary school. She was the inspiration behind the counselor in There's a Boy in the Girls' Bathroom . He was married in 1985. Hisdaughter, Sherre, was born in 1987.