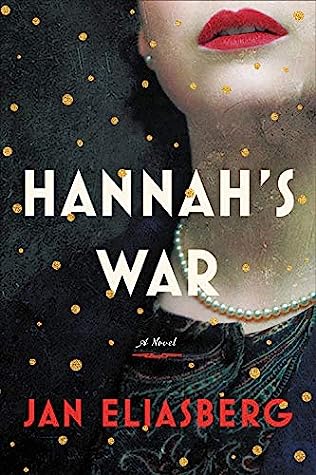 Jan Eliasberg is an award-winning writer/director with an MFA in Directing from the Yale School of Drama and an MFA in Fiction from the MFA Program for Writers at Warren Wilson, where she was mentored by Charles Baxter, Joan Silber and Antonya Nelson. HANNAH'S WAR is her debut novel -- HANNAH'S WAR will be published by Little, Brown on March 3, 2020.
Eliasberg has a notable career as a screenwriter, writing films and television series driven by strong female leads. She wrote W.A.S.P. about the Women Air Service Pilots in WWII for Nicole Kidman and Cameron Diaz at FOX. Mi Corazon was written for Universal, with Jennifer Lopez attached to star. She wrote Heart N Soul, a hip hop Pygmalion for Warner Brothers, and The Gemcutter, a YA historical fantasy, for Sony. She is attached to direct all of her original screenplays.
Her screenplay, Heart of the Atom, has been honored by the Black List; the BBC Short List; Film Independents prestigious Producers Lab, and the Athena Film Festivals Best Screenplays about female leaders.
She adapted the screenplay of Heart of the Atom into a novel now known as Hannahs War which was pre-emptively bought by Judy Clain at Little Brown as their lead title for Spring 2020.
Heart of the Atom is the story of a female Austrian physicist working on the critical assemblies team of the Manhattan Project in the alien world of Los Alamos, NM in 1945. She has a hidden past in Germany, one that makes her the prime suspect when an army investigator arrives with a chilling mission: to rout out a spy leaking secrets to the Nazis.
For television, Eliasberg was a writer/producer and director for six seasons of NBCs Sisters. She wrote Spirit of St. Louis, a pilot for CBS and CBS Studios, and two pilots for Fox and Fox Studios, The Blue Line, with Angela Bassett attached, and Fearless.
Eliasberg is currently in development on her original film, Before I Sleep, with Sophia Lillis (IT, IT 2, NANCY DREW) starring. BEFORE I SLEEP traces the complex and unlikely bonds that develop between two women an architect, already devastated by the sudden death of her fiance, whose world implodes when his runaway daughter shows up on her doorstep. Their harrowing journey from Los Angeles to Montana, with a life-threatening detour through Reno, NV, leads them to an unexpected catharsis and liberation. BEFORE I SLEEP is an exploration of loss, grief, love and hope, as seen through a uniquely female point of view.
Eliasbergs prolific directing career includes the feature film, Past Midnight, starring Paul Giamatti, the late Natasha Richardson, and Rutger Hauer. She is known for nurturing performances in film, television and theatre from some of the finest actors of our generation: among them Michael B. Jordan, Michelle Williams, George Clooney, Frances McDormand, Tony Shalhoub, Stanley Tucci, and John Turturro.
Eliasberg was hand picked by Michael Mann to be the first female director of the ground-breaking television series MIAMI VICE, followed by Manns critically-acclaimed CRIME STORY. She went on to shatter more glass ceilings as the first female director of the award-winning series WISEGUY, among many others. She has directed dramatic pilots for CBS, NBC, and ABC, as well as countless episodes of television series, including Bull, Nashville, Parenthood, The Magicians, Blue Bloods, NCIS: Los Angeles, Supernatural, and dozens of others. In the course of her career as a director, she has won the EMMY, IMAGEN, and the NAACP IMAGE awards.
Eliasberg received her BA from Wesleyan University, Magna Cum Laude and an MFA in Fiction from the MFA Program for Writers at Warren Wilson. She is a graduate of the prestigious AFI Directing Workshop for Women, where she made her short film, The Doctor, which won the Best Fiction Short Film Award at the Los Angeles Film Festival.
She has directed theatre at the Royal Court Theatre in London; South Coast Rep; The Manhattan Theatre Club, and The Public Theatre in New York C