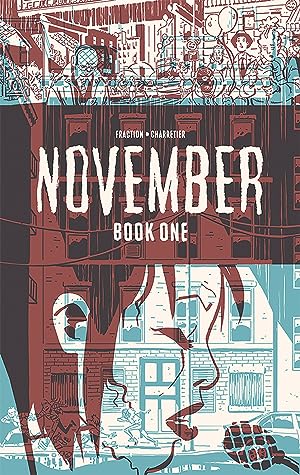 "How he got started in comics: In 1983, when Fraction was 7 years old and growing up in Kansas City, Mo., he became fascinated by the U.S. invasion of Grenada and created his own newspaper to explain the event. "I've always been story-driven, telling stories with pictures and words," he said.

Education and first job: Fraction never graduated from college. He stopped half a semester short of an art degree at Kansas City Art Institute in Missouri in 1998 to take a job as a Web designer and managing editor of a magazine about Internet culture.

"My mother was not happy about that," he said.

But that gig led Fraction and his co-workers to split off and launch MK12, a boutique graphic design and production firm in Kansas City that created the opening credits for the James Bond film "Quantum of Solace."

Big break: While writing and directing live-action shoots at MK12, Fraction spent his spare time writing comics and pitching his books each year to publishers at Comic-Con. Two books sold: "The Last of the Independents," published in 2003 by AiT/Planet Lar, and "Casanova," published in 2006 by Image Comics.

Fraction traveled extensively on commercial shoots. Then his wife got pregnant. So Fraction did what any rational man in his position would do -- he quit his job at MK12 to pursue his dream of becoming a full-time comic book writer.

Say what? "It was terrifying," said Fraction, who now lives in Portland, Ore. "I was married. We had a house. We had a baby coming. And I just quit my job."

Marvel hired Fraction in June 2006, thanks largely to the success of his other two comics. "I got very lucky," he half-joked. "If it hadn't worked out, I would have had to move back in with my parents.