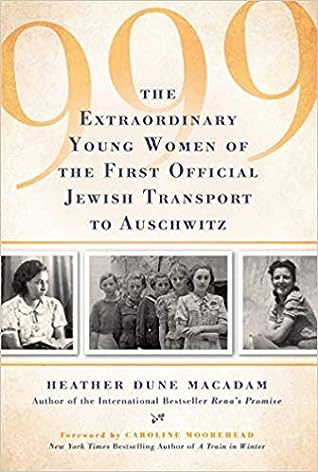 NEW BOOK JAN. 2020:
My new book 999 - The Extraordinary Young Women of the First Official Jewish Transport to Auschwitz brings together stories of girls on the first transport along with historic research that will astound new fans and former fans of Rena's Promise.
999 places the young women of the first transport front and center in Holocaust history and women's history, and I am hugely excited about the reception it is already havingyou will meet Edith, who is very much like, Rena (vivacious, generous and compassionate) and who is still alive today, at 95! My new BFF. You can find her virtual 95th birthday party on our Facebook Page: https://www.facebook.com/999themovie/

You can also find my Vlog on the Rena's Promise YouTube Channel and follow some of my journeys to Auschwitz, Slovakia and Tylicz, Poland. That channel started as a desire to fight Holocaust denial by promoting truth and helped spur the rebirth of Rena's Promise: The Story of Sisters in Auschwitz and made the digital edition an Amazon BEST-SELLING Holocaust Memoir for 6 months in 2012. Since then a new edition of Renas Promise has been released, as well as an audio book. RP has been translated into Japanese, Turkish, Portuguese, Dutch, German and published in the UK and commonwealth. The website for RenasPromise.com offers teachers free curriculum on innovative ways to teach the Holocaust and provides a map called the Promise Project that shows where girls from the first transport lived and the towns they were deported from.

My novel, The Weeping Buddha, was released by Akashic Books in 2003. I really want to write fiction, but even this murder mystery is based in part on my attempt to deal with an unsolved mystery in my life. It was a finalist in the Nero Wolf Awards and Best Mystery, Lambda Awards (2004).

While NPR doesnt seem to do commentaries anymore, you can find some of my quirky essays in the archives of ALL THINGS CONSIDERED. Additionally, I have been published in The New York Times, National Geographic, Newsweek, Marie Claire, The Guardian, The Daily Mail, YOU Magazine (Sunday Supplement to Mail on Sunday), The Advocate and Racing Home: Short Stories By Award-Winning North Carolina Writers.