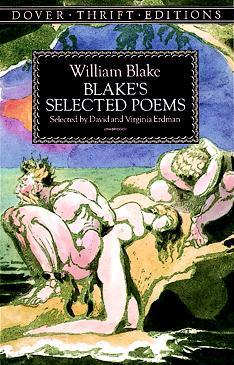 An alternate cover edition of this ISBN can be found here. Features 104 of Blake's poems: "A Song of Liberty," "The Argument," "Proverbs of Hell," "The Mental Traveller," "The Land of Dreams," "To the Evening Star" and many .

William Blake was an English poet, painter, and printmaker. Largely unrecognised during his lifetime, Blake's work is today considered seminal and significant in the history of both poetry and the visual arts.

Blake's prophetic poetry has been said to form "what is in proportion to its merits the least read body of poetry in the language". His visual artistry has led one modern critic to proclaim him "far and away the greatest artist Britain has ever produced." Although he only once travelled any further than a day's walk outside London over the course of his life, his creative vision engendered a diverse and symbolically rich corpus, which embraced 'imagination' as "the body of God", or "Human existence itself".

Once considered mad for his idiosyncratic views, Blake is highly regarded today for his expressiveness and creativity, and the philosophical and mystical currents that underlie his work. His work has been characterized as part of the Romantic movement, or even "Pre-Romantic", for its largely having appeared in the 18th century. Reverent of the Bible but hostile to the established Church, Blake was influenced by the ideals and ambitions of the French and American revolutions, as well as by such thinkers as Emanuel Swedenborg.

Despite these known influences, the originality and singularity of Blake's work make it difficult to classify. One 19th century scholar characterised Blake as a "glorious luminary", "a man not forestalled by predecessors, nor to be classed with contemporaries, nor to be replaced by known or readily surmisable successors."