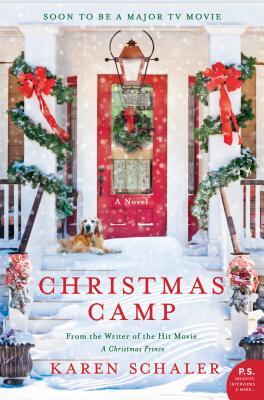 Also, for Karen's newest novel Finding Christmas released in October, Publishers Weekly has rave reviews saying "Schalers smart, appealing protagonists will keep readers turning the pages, and the plotting is pitch-perfect, leading to an inevitable but charming happily-ever-after. Sweet as a Hallmark Channel movie, but never saccharine, this innocent tale will satisfy fans of both romance and Christmas."

Karen's Christmas Camp Hallmark movie premiered in July as part of the network's beloved Christmas in July promotion and her next Christmas movie, Rediscovering Christmas comes out on Lifetime in December. You can also catch Karen's other Christmas movie on Lifetime, Every Day is Christmas starring Toni Braxton.

Embracing her nickname Christmas Karen, Karen is also bringing her Christmas Camp movie and novels to life, creating a real-life Christmas Camp for grown-ups at the award-winning Phoenician Resort and says everyones invited to join in the holiday merrymaking!

Karen credits her passionate and prolific writing style to her early award-winning career as a TV broadcast journalist. In addition to being a crime and investigative reporter, Karen was the first reporter ever embedded with troops in Bosnia, and the first reporter embedded with a combat apache helicopter unit in Afghanistan. After both Bosnia and Afghanistan Karen wrote, reported, and produced Emmy award-winning documentaries that aired on NBC & ABC.

Having traveled to more than 68 countries, after hosting ABCs national travel show, Karen created and trademarked her Travel Therapy TV segments featuring the most inspiring and empowering places to go around the world based on what youre going through in life.

Karen is a sought after lifestyle and travel expert appearing on Good Morning America, TODAY, Fox & Friends, FOX, Inside Edition, Daily Mail TV, CNN, MSNBC, the BBC, and on dozens of radio shows and local TV affiliates across the country.

Karen grew up outside of Seattle and in Los Angeles and graduated with honors from California State University Fullerton with a double major in Broadcast Journalism and Sociology.

When Karens not traveling researching her next story you can find her in New York City, Scottsdale, AZ, and visiting her family in Washington State.

A favorite question Karen was asked once when she was still working as a TV correspondent came from an Oscar nominated screenwriter and author who asked her What would you do if you knew you couldnt fail?

Karens answer, without hesitation. Exactly what youre doing

And Karen says that question has fueled her forward ever since.