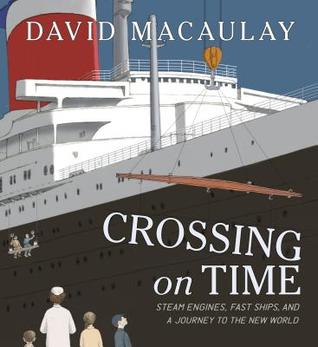 Crossing on Time: Steam Engines, Fast Ships, and a Journey to the New World Reviews

David Macaulay, born in 1946, was eleven when his parents moved from England to Bloomfield, New Jersey. He found himself having to adjust from an idyllic English childhood to life in a fast paced American city. During this time he began to draw seriously, and after graduating from high school he enrolled in the Rhode Island School of Design (RISD). After spending his fifth year at RISD in Rome on the European Honors Program, he received a bachelors degree in architecture and vowed never to practice. After working as an interior designer, a junior high school teacher, and a teacher at RISD, Macaulay began to experiment with creating books. He published his first book, Cathedral, in 1973. Following in this tradition, Macaulay created other booksincluding City, Castle, Pyramid, Mill, Underground, Unbuilding, and Mosquethat have provided the explanations of the how and the why in a way that is both accessible and entertaining. From the pyramids of Egypt to the skyscrapers of New York City, the human races great architectural and engineering accomplishments have been demystified through Macaulay's elaborate show-and-tells. Five of these titles have been made into popular PBS television programs.