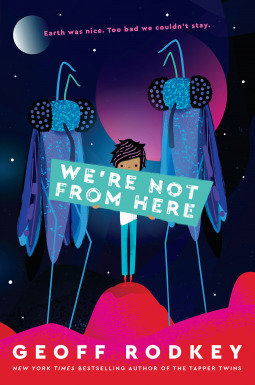 Geoff Rodkey is the author of the New York Times bestseller THE TAPPER TWINS GO TO WAR (WITH EACH OTHER) and its sequels; the critically acclaimed CHRONICLES OF EGG adventure-comedy series; THE STORY PIRATES PRESENT: STUCK IN THE STONE AGE, a comic novel bundled with a how-to guide for kids who want to create stories of their own; and the forthcoming science fiction novel WE'RE NOT FROM HERE (March 2019).

Before he began writing books, Geoff was the Emmy-nominated screenwriter of such hit films as DADDY DAY CARE, RV, and the Disney Channel's GOOD LUCK, CHARLIE, IT'S CHRISTMAS. His early writing credits include the educational video game WHERE IN THE WORLD IS CARMEN SANDIEGO?, the non-educational MTV series BEAVIS AND BUTT-HEAD, and Comedy Central's POLITICALLY INCORRECT.

Geoff grew up in Freeport, Illinois and began his writing career on his high school newspaper. While in college, he was an editor of both the Harvard Lampoon and the Let's Go travel guide series.

He currently lives in New York City with his wife, three sons, and an easily confused gerbil.