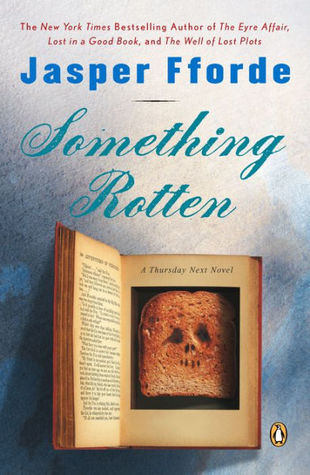 Fforde began his career in the film industry, and for nineteen years held a variety of posts on such movies as Goldeneye, The Mask of Zorro and Entrapment. Secretly harbouring a desire to tell his own stories rather than help other people tell their's, Jasper started writing in 1988, and spent eleven years secretly writing novel after novel as he strove to find a style of his own that was a no-mans-land somewhere between the warring factions of Literary and Absurd.

After receiving 76 rejection letters from publishers, Jasper's first novel The Eyre Affair was taken on by Hodder & Stoughton and published in July 2001. Set in 1985 in a world that is similar to our own, but with a few crucial - and bizarre - differences (Wales is a socialist republic, the Crimean War is still ongoing and the most popular pets are home-cloned dodos), The Eyre Affair introduces literary detective named 'Thursday Next'. Thursday's job includes spotting forgeries of Shakespeare's lost plays, mending holes in narrative plot lines, and rescuing characters who have been kidnapped from literary masterpieces.

Luckily for Jasper, the novel garnered dozens of effusive reviews, and received high praise from the press, from booksellers and readers throughout the UK. In the US The Eyre Affair was also an instant hit, entering the New York Times Bestseller List in its first week of publication.

Since then, Jasper has added another six to the Thursday Next series and has also begun a second series that he calls 'Nursery Crime', featuring Jack Spratt of The Nursery Crime Division. In the first book, 'The Big Over Easy', Humpty Dumpty is the victim in a whodunnit, and in the second, 'The Fourth Bear', the Three Bear's connection to Goldilocks disappearance can finally be revealed.

In January 2010 Fforde published 'Shades of Grey', in which a fragmented society struggle to survive in a colour-obsessed post-apocalyptic landscape.

His latest series is for Young Adults and include 'The Last Dragonslayer' (2010), 'Song of the Quarkbeast' (2011) and 'The Eye of Zoltar' (2013). All the books centre around Jennifer Strange, who manages a company of magicians named 'Kazam', and her attempts to keep the noble arts from the clutches of big business and property tycoons.

Fforde failed his Welsh Nationality Test by erroneously identifying Gavin Henson as a TV chef, but continues to live and work in his adopted nation despite this setback. He has a Welsh wife, two welsh daughters and a welsh dog, who is mad but not because he's Welsh. He has a passion for movies, photographs, and aviation. (Jasper, not the dog)