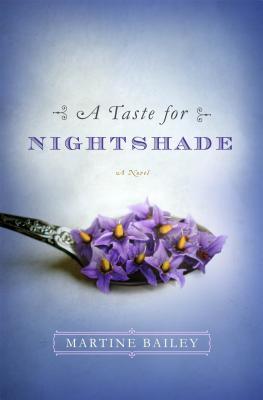 Martine is a keen reader who enjoys crime, mysteries and the gothic. Her debut, 'An Appetite for Violets' takes sharp-witted cook Biddy Leigh on a murderous trip to Italy. Its mix of crime, gastronomy and social history was described by Fay Weldon as creating a new genre, culinary gothic. An Appetite for Violets was picked by the American Library Associations Booklist as one of the years top ten crime fiction debuts.

A Taste for Nightshade/The Penny Heart is a dark novel of suspense that draws on age-old themes of cooking, trickery and revenge. Inspired by Martines 20-month stay in New Zealand and Australia it depicts a world of deceit, double-crossing and revenge.

The stars, riddles and murder align in 'The Almanack', a mystery featuring fifty authentic riddles. Following a desperate summons from her mother, Tabitha Hart departs London for her home village of Netherlea only to find that her mother has allegedly drowned. With time running out, can Tabitha solve the almanacks riddles and bring her mother's killer to justice?

In pursuit of authenticity Martine has studied with TV food historian Ivan Day and experienced Georgian food and fashion at firsthand with an historic re-enactment society. As an amateur cook she won the Merchant Gourmet Recipe Challenge and was a former UK Dessert Champion, cooking at Le Meurice in Paris. Martine now lives in Cheshire, England, and is married with one son.