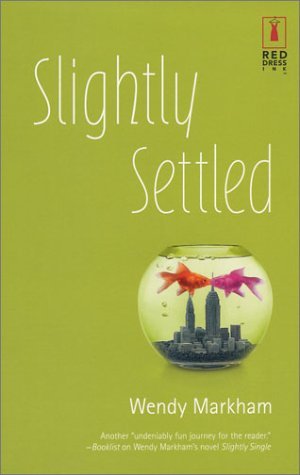 Slightly Settled by Wendy Markham released on Jan 23, 2004 is available now for purchase....

New York Times bestseller Wendy Corsi Staub is the award-winning author of more than seventy published novels and has sold more than three million books worldwide. Under her own name, Wendy achieved New York Times bestselling status with her single title psychological suspense novels. Those novels and the women's fiction she writes under the pseudonym Wendy Markham have also frequently appeared on the USA Today, Barnes and Noble Top Ten, and Bookscan bestseller lists.

Wendy grew up in a large, close-knit family in rural southwestern New York State and decided she wanted to become an author while in third grade. She worked in two independent bookstores during college, then moved alone to New York City at 21 to pursue her dream. After stints as a book editor for a Manhattan publishing house and an account coordinator for a major advertising agency, she sold her first novel, the supernatural young adult thriller SUMMER LIGHTNING. Early in her writing career, she published in various genres including suspense, horror, historical and contemporary romance, television and movie tie-in, and biography. She also co-authored a mystery series with former New York City mayor Ed Koch and has ghost-written for a number of bestselling authors and celebrities.

Wendy now lives in the New York City suburbs with her husband of nineteen years and their two children. A 1986 graduate of the State University of New York at Fredonia, she proudly delivered the keynote commencement address at her alma mater in May 2008 and is serving a three-year appointment to the Dean's Advisory Council for the College of Arts and Sciences.