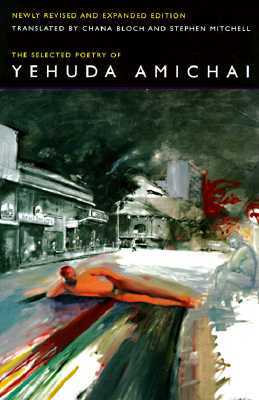 Yehuda Amichai (Hebrew: ; 3 May 1924 22 September 2000) was an Israeli poet. Amichai is considered by many, both in Israel and internationally, as Israel's greatest modern poet. He was also one of the first to write in colloquial Hebrew.

Yehuda Amichai was for generations the most prominent poet in Israel, and one of the leading figures in world poetry since the mid-1960s.

Yehuda Amichai was born in Wrzburg, Germany, to an Orthodox Jewish family, and was raised speaking both Hebrew and German.

Amichai immigrated with his family at the age of 11 to Petah Tikva in Mandate Palestine in 1935, moving to Jerusalem in 1936. He attended Ma'aleh, a religious high school in Jerusalem. He was a member of the Palmach, the strike force of the Haganah, the defense force of the Jewish community in Mandate Palestine. As a young man he volunteered and fought in World War II as a member of the British Army, and in the Negev on the southern front in the Israeli War of Independence.

After discharge from the British Army in 1946, Amichai was a student at David Yellin Teachers College in Jerusalem, and became a teacher in Haifa. After the War of Independence, Amichai studied Bible and Hebrew literature at the Hebrew University of Jerusalem. Encouraged by one of his professors at Hebrew University, he published his first book of poetry, Now and in Other Days, in 1955.

In 1956, Amichai served in the Sinai War, and in 1973 he served in the Yom Kippur War. Amichai published his first novel, Not of This Time, Not of This Place, in 1963. It was about a young Israeli who was born in Germany, and after World War II, and the war of Independence in Israel, he visits his hometown in Germany, recalls his childhood, trying to make sense of the world that created the Holocaust. His second novel, Mi Yitneni Malon, about an Israeli poet living in New York, was published in 1971 while Amichai was a visiting professor at the University of California, Berkeley. He was a poet in residence at New York University in 1987. For many years he taught literature in an Israeli seminar for teachers, and at the Hebrew University to students from abroad.

Amichai was invited in 1994 by Prime Minister Yitzhak Rabin to read from his poems at the ceremony of the Nobel Peace Prize in Oslo.

"God has pity on kindergarten children" was one of the poems he read. This poem is inscribed on a wall in the Rabin Museum in Tel-Aviv. There are Streets on his name in cities in Israel, and also one in Wurzburg.

Amichai was married twice. First to Tamar Horn, with whom he had one son, and then to Chana Sokolov; they had one son and one daughter. His two sons were Ron and David, and his daughter was Emmanuella.