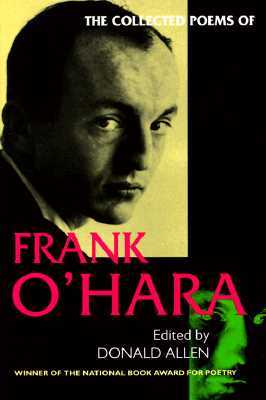 Frank O'Hara was born in Baltimore, Maryland and grew up in Grafton, Massachusetts. O'Hara served in the South Pacific and Japan as a sonarman on the destroyer USS Nicholas during World War II.

With the funding made available to veterans he attended Harvard University, where he roomed with artist/writer Edward Gorey. Although he majored in music and did some composing, his attendance was irregular and his interests disparate. O'Hara was heavily influenced by visual art, and by contemporary music, which was his first love (he remained a fine piano player all his life and would often shock new partners by suddenly playing swathes of Rachmaninoff when visiting them).

While at Harvard, O'Hara met John Ashbery and began publishing poems in the Harvard Advocate. Despite his love for music, O'Hara changed his major and graduated from Harvard in 1950 with a degree in English.

He then attended graduate school at the University of Michigan in Ann Arbor. While at Michigan, he won a Hopwood Award and received his M.A. in English literature 1951. That autumn O'Hara moved into an apartment in New York City with Joe LeSueur, who would be his roommate and sometimes his lover for the next 11 years. Known throughout his life for his extreme sociability, passion, and warmth, O'Hara had hundreds of friends and lovers throughout his life, many from the New York art and poetry worlds. Soon after arriving in New York, he was employed at the front desk of the Museum of Modern Art and began to write seriously.

O'Hara was active in the art world, working as a reviewer for Art News, and in 1960 was made Assistant Curator of Painting and Sculpture Exhibitions for the Museum of Modern Art. He was also friends with artists like Willem de Kooning, Norman Bluhm, Larry Rivers and Joan Mitchell. O'Hara died in an accident on Fire Island in which he was struck and seriously injured by a man speeding in a beach vehicle during the early morning hours of July 24, 1966. He died the next day of a ruptured liver at the age of 40 and was buried in the Green River Cemetery on Long Island.