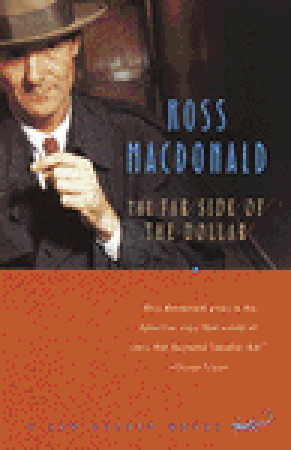 Has Tom Hillman run away from his exclusive reform school, or has he been kidnapped? Are his wealthy parents protecting him or their own guilty secrets? And why does every clue lead Lew Archer to an abandoned Hollywood hotel, where starlets and sailors once rubbed shoulders with grifters--and where the present clientele includes a brand-new corpse....

Ross Macdonald is the pseudonym of the American-Canadian writer of crime fiction Kenneth Millar. He is best known for his series of hardboiled novels set in southern California and featuring private detective Lew Archer.

Millar was born in Los Gatos, California, and raised in his parents' native Kitchener, Ontario, Canada, where he started college. When his father abandoned his family unexpectedly, Macdonald lived with his mother and various relatives, moving several times by his sixteenth year. The prominence of broken homes and domestic problems in his fiction has its roots in his youth.

In Canada, he met and married Margaret Sturm (Margaret Millar)in 1938. They had a daughter, Linda, who died in 1970.

He began his career writing stories for pulp magazines. Millar attended the University of Michigan, where he earned a Phi Beta Kappa key and a Ph.D. in literature. While doing graduate study, he completed his first novel, The Dark Tunnel, in 1944. At this time, he wrote under the name John Macdonald, in order to avoid confusion with his wife, who was achieving her own success writing as Margaret Millar. He then changed briefly to John Ross Macdonald before settling on Ross Macdonald, in order to avoid mixups with contemporary John D. MacDonald. After serving at sea as a naval communications officer from 1944 to 1946, he returned to Michigan, where he obtained his Ph.D. degree.

Macdonald's popular detective Lew Archer derives his name from Sam Spade's partner, Miles Archer, and from Lew Wallace, author of Ben-Hur: A Tale of the Christ. Macdonald first introduced the tough but humane private eye in the 1946 short story Find the Woman. A full-length novel, The Moving Target, followed in 1949. This novel (the first in a series of eighteen) would become the basis for the 1966 Paul Newman film Harper. In the early 1950s, he returned to California, settling for some thirty years in Santa Barbara, the area where most of his books were set. The very successful Lew Archer series, including bestsellers The Goodbye Look, The Underground Man, and Sleeping Beauty, concluded with The Blue Hammer in 1976.

Macdonald is the primary heir to Dashiell Hammett and Raymond Chandler as the master of American hardboiled mysteries. His writing built on the pithy style of his predecessors by adding psychological depth and insights into the motivations of his characters. Macdonald's plots were complicated, and often turned on Archer's unearthing family secrets of his clients and of the criminals who victimized them. Lost or wayward sons and daughters were a theme common to many of the novels. Macdonald deftly combined the two sides of the mystery genre, the "whodunit" and the psychological thriller. Even his regular readers seldom saw a Macdonald denouement coming.